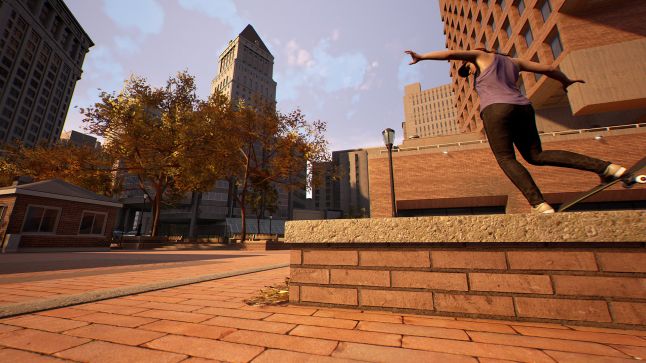 
The first time I ever saw someone pull off a kickflip in real life, I was utterly amazed. Though it was well-after the Tony Hawk’s Pro Skater series had blazed a path for so-called “extreme sports” in pop culture – and I had pulled off many hundred of my own all around School II in THPS2 – there was something about the sheer dexterity of the maneuver that only came across in the crack of a real board hitting real pavement.

In Tony Hawk, pulling off “basic” flip tricks is simply a matter of ollie-ing and hitting a simple button combination; you don’t even need to know what move you’re trying to execute until you’re already in the air. As game developer and real-life skater Marc-Andre Houde – lead developer of Session, an popular indie skateboarding game that hit Early Access in September – the actual art of skating is a far cry from the perfect lines and endless combos of the most famous franchise of its type in games.

“I had been skating for a while, since I was eight or nine years old, even before the first Tony Hawk game came out, so it’s not like it made me into a skater or anything,” Houde says. “It combined two things I was passionate about, so I liked that, but I never really saw it as a skating game. It was a combo game, a really fun combo game…It helped boost the culture of skating, and it made it more popular, but as far as simulating what it’s actually like to be on a board, it wasn’t really going for that.”

Prior to Session, Houde worked as an animator and motion capture expert on a wide variety of notable mega-games, including the Assassin’s Creed and Batman: Arkham series. While he enjoyed his experience at studios that churn out blockbuster after blockbuster, in his spare time, he kept cranking away at different design documents for what he deemed a more “simulation-like” skateboarding game, inspired by the cult classic Thrasher: Skate and Destroy, a more realistic take on the sport that never quite captured the same audience as the easily-accessible THPS.

But it was only after Houde played Skate – arguably the only successful attempt by a major publisher to resurrect the extreme sports genre in the post-Tony Hawk era – that he realized there was a legitimate market for a skating game that actually felt like the real thing. “The idea of using the thumbsticks for tricks was something I had never considered,” he says. “To me, it was a revolution, and it made me want to get back into it.”

After Skate managed to outsell a middling entry in the waning THPS series in 2007, Houde decided to enlist some of his coworkers in making a 2.5D Skate-like prototype in their off-hours. But, as crunch began to mount, and they all started pulling 80-hour weeks at their day jobs, the project fizzled to nothing. It was only after Houde co-founded his own company, Crea-ture Studios, in 2013, that he was able to fully commit his time to making his dream project.

“It’s just a tough part of working in the triple-A industry,” he says. “Even when you’re between big projects, you get busy really quickly, and you don’t have any time to work on your own thing. That’s why it’s only able to happen now.”

When Crea-ture started working on the game that would become Session, Houde was determined to start from scratch, rather than simply building on the model that Skate had established a decade earlier. As part of that process, they quickly landed on perhaps the game’s most controversial design decision: by default, you use the triggers to steer your skater, rather that the traditional left-thumbstick, which is instead used for the famous feats of foot-acrobatics. Though Houde admits that some of his fellow developers at the studio found the control scheme anything-but-straightforward, over time, he managed to convert them to the cause.

“I think a lot of the time, we have a tendency to mistake a habit for intuitiveness,” he says. “Basically, you think a thing is intuitive, but it’s actually just because you’ve done it that way for so long.

“When it comes to a ‘realistic’ skateboarding game, in real life, when you turn a skateboard, you put more weight on the direction you want to go, on your toes or your heel, depending on your style. So, newcomers find it a lot more intuitive, but most of us, when it comes to that quick motion, our thumbs still go to that left thumbstick. You have to do it for several hours to really get used to it, but once you do, I think it works really well.”

Houde recognizes that in today’s crowded game market, it’s a significant risk to test a player’s patience with a difficult-to-grasp control setup right out of the gate. But, to him, that cycle of trial-and-error is true to the real-life sport that Session purports to represent, and is thus a key part of its appeal.

By the default control scheme, when your character starts skating with the opposite foot forward, the entire stick setup flips, which disorients even veteran players. He himself views the project as a “statement” that hearkens back to previous eras of gaming, where players would spend hours mastering a game’s core mechanics at their own pace. That’s also why Session doesn’t include the standard THPS-esque litany of missions to complete and tapes to collect. Houde’s stated approach is simple: set your own goals, and make your own fun.

While he admits there are some definite limitations to this approach, for now, he’s happy with Session’s reception so far. (He also notes the game’s extensive roadmap, which includes better physics, a more fleshed-out city, and an intricate editing mode that simulates the skate videos of the sport’s golden age.) He says the studio owes that to Session’s hardcore bona-fides, not to mention the roiling hunger among that community for new skateboarding games, which shows no signs of abating any time soon.

“We really wanted to capture the experience of what it’s like to actually start skating, where you have to learn the tricks that you want to learn, and do it all by your own power,” he says. “I have friends who played the game for hours and hours, mastered a lot of it, then took a week or two off, and they told me they had to relearn a bunch of the more complex tricks. That’s exactly what we’re going for.

“If you don’t practice, you suffer…When I was trying to explain why I wanted to make a simulation skateboard game to my coworkers, they would always say, ‘real life is boring. Why make a game about that?’ Well, to me, real life isn’t boring, it’s very hard, but interesting. That’s what I want the people who play Session to appreciate.”