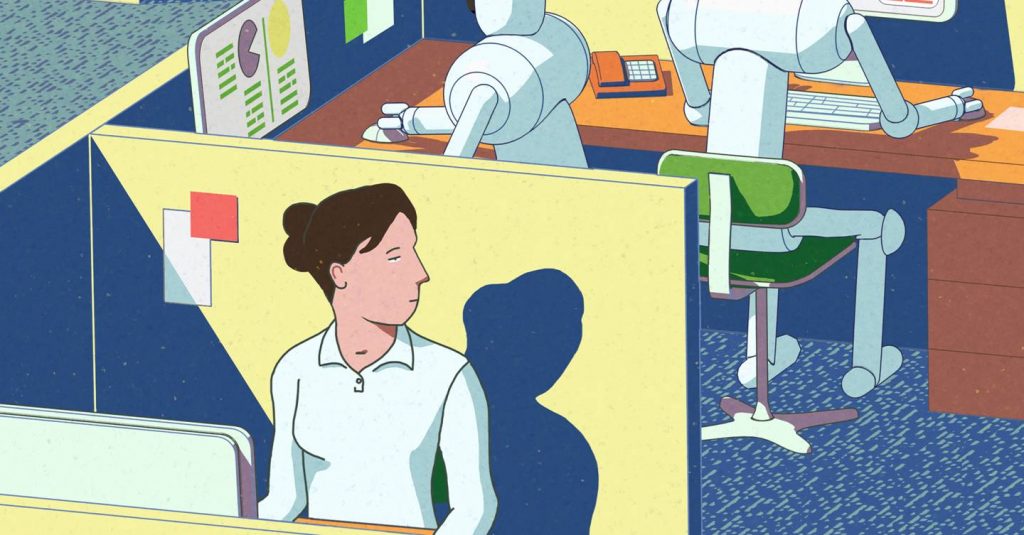 
The world of work faces dramatic disruption: robots will work alongside humans – wholly replacing some roles and potentially reconfiguring our entire economic system. But there’s no need for panic, says Wael Elrifai, vice president of solution engineering for Hitachi Vantara – we’ve been through this situation before.

He points to the canonical example – horse and buggies – noting that while we have fewer blacksmiths than in the early 1900s, we have other roles like mechanics, manufacturing and so on. “There was huge job growth, but there was a massive temporary dislocation,” Elrifai says. “But it was no good for the blacksmiths, was it?”. And that’s where the problem lies with AI. A European Commission paper suggests that as many as 47 per cent of highly automatable jobs will disappear by 2030, which Elrifai notes will first impact low-skilled labour and women.

Dr Kazuo Yano, Fellow, Hitachi Ltd, argues that humans shouldn’t be viewed as being in direct competition with machines for work, but that automation and AI should be used to augment what we can accomplish. “It’s a kind of human empowerment, so our capability is extended,” Dr Yano says. “We should be seeing AI and machines as a tool, just as we use a calculator or a computer as a tool.”

Thankfully, we have time to address such economic evolution. “I think, generally, there’s a feeling that this is happening tomorrow or next year,” Elrifai says. In some ways, the AI revolution has already started – the work kicked off in the 1950s – and we have a long transition period ahead of us.

Driverless cars, for example, won’t be on the roads before 2030, he predicts. “So a taxi driver is someone who will be dislocated over a long period of time,” he says, though he notes they’re already facing disruption from services such as Uber. “Whether it’s a robot taking the job or another human, it’s the same thing for the driver who’s being replaced.”

The economy can cope with disruption, but the challenge grows when the change is more significant, impacts a larger industry or happens too quickly. “Is this just going to happen piecemeal, industry by industry, so there’s time to transition?” Elrifai wonders. “Or are we going to face a massive shift across a million different industries at once?”

He points to transportation and logistics; taxis included, that wider industry makes up more than a tenth of GDP globally. Losing all of those jobs would have a significant global impact, but reducing costs for transport could also spark a dramatic decrease in the cost of living, with the biggest benefits accruing to those most in need. That rebalancing needs to be considered. “It’s the poor who are burdened by logistics costs,” he warns. Short-term job losses for some may be the price of better lives for others in the longer term, though the immediate blows can be softened by reskilling people
and by financial support via ideas such as universal basic income.

To ensure the future of work is positive for everyone, we need to expand the discussion beyond economists, policy wonks and computer scientists, Elrifai adds. Alongside including in the debate those most likely to be displaced, he argues there’s three other groups who should be consulted: psychologists, educators and testing experts, so we can better understand human capabilities.

Dr Yano agrees, adding that we must also set clear outcomes regarding what problems we’re actually trying to solve. But those who develop and design AI may not be the best suited for that role. “Somebody who knows algorithms or information science is not enough to set a good outcome,” he says. “Conventionally, the outcome is simply money or profit, or revenue or engagement of time, and that can create some very bad, biased results.”

But that raises a wider question that surrounds AI in work that’s yet to be answered, Elrifai says: “What do we want from all of this? Lower cost of living? Increased leisure time? Reduced inequality? Increased return on human labour?” We need not pick only one, he says – we can focus on equality of outcome as well as opportunity.

AI is one way to address the questions around work, but the questions themselves aren’t new. “This is the most exciting time for humanity – now is when we get to work on what it means to be a human beyond doing what we’ve done for the last two million years, which was essentially spending all of our time keeping fed,
warm and safe,” says Elrifai.

“Companies such as Hitachi are very much engaged in these discussions, working with the World Economic Forum, the Alliance for IOT Innovation and many other organisations to ensure a bright future for all of humanity. Topics like ethical AI, the Future of Work, and what I call Humanity 3.0 are very much at the core of the way we think about the future… We didn’t get to be a 100-plus-year-old company by only living in the present.”

Innovation for the future

Modern life is saturated with data, and technologies are emerging nearly every day – but how can we use these innovations to make a real difference to the world?

Hitachi believes that social innovation should underpin everything it does, so it can find ways to tackle the biggest issues we face today.

Visit Social-Innovation.Hitachi to learn how Hitachi Social Innovation is Powering Good and helping drive change across the globe.

A Learning Engine for Embodied AI

Maps Reveal Where the Creative Class Is Growing