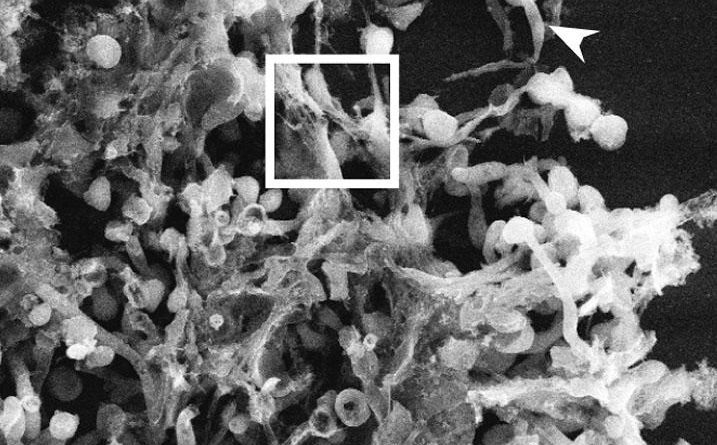 
CHAPEL HILL, NC – Inflammation is a hallmark of many health conditions, but quantifying how the underlying biology of inflammation contributes to specific diseases has been difficult. For the first time, UNC School of Medicine researchers and colleagues now report the development of a new technology to identify white blood cells called neutrophils that are primed to eject inflammatory DNA into the circulation via a process called NETosis.

“This new test will allow investigators to measure NETosis in different diseases and to test drugs that may inhibit or promote the process,” said senior author Leslie Parise, PhD, professor and chair of the UNC Department of Biochemistry and Biophysics.

When foreign invaders such as viruses or bacteria enter our bodies, white blood cells rush in to fight the invaders in various ways. One type of white cell, the neutrophil, expels its DNA into the bloodstream to trap bacteria and viruses and aid in their killing to prevent infections. This neutrophil DNA has a net-like appearance and is called Neutrophil Extracellular Traps, or NETs. The process by which this DNA is thrust into the extracellular space is called NETosis. These so-called DNA NETs are reported to contribute to inflammation in numerous diseases such as autoimmune disease, sepsis, arthritis, cancers, sickle cell disease, and thrombosis.

NETosis can be activated by different chemical stimuli but to the eye, the final NETotic neutrophil looks the same. To help distinguish neutrophils activated by different stimuli and in a very rapid manner, the Parise laboratory leaned on machine learning, a branch of artificial intelligence built on the idea that computers can acquire knowledge through data and observations without explicit programming. The computers can then learn to generalize from examples and make predictions.

Machine learning has been used in analysis of genomics, drug discovery, modeling protein structures, and disease diagnosis. Few studies have used automated imaging technologies with machine learning in non-diagnostic and exploratory research-focused efforts, such as cell quantification in animal models.

“The machine learning revolution has come about only in the past few years due to rapid developments in parallel computing and mathematical optimization theory,” said co-author Joshua Cooper, PhD, Professor in the Department of Mathematics at the University of South Carolina. “Most scientific work using these extraordinarily powerful tools thus far has focused on building predictive models, and usually on very expensive equipment. We have shown it’s also possible to deploy these tools on commodity hardware to advance fundamental science by automating analyses previously requiring enormous amounts of human labor, and by transforming qualitative biological morphology into measurably quantitative features.”

Cell classification is laborious, relying on heavily supervised image analysis tools with the need for continuous user interaction. Although the reduced error rates and exceptional learning speeds of machine learning have the potential to transform the field of cellular imaging, they have not been widely adopted in the biological sciences, in part because of a lack of testing and validation of such methods due to shortages of large datasets for training.

Convolutional neural networks (CNNs) are deep learning algorithms commonly used in image recognition and classification. Their structure was inspired by the structure of the mammalian visual cortex, whose function is pattern recognition and computing complex object attributes.

In the Scientific Reports paper, first author Laila Elsherif, PhD, and colleagues including co-authors Noah Sciaky at UNC and Joshua Cooper, PhD, at the University of South Carolina, demonstrated for the first time the feasibility of designing different CNNs to address key questions related to neutrophil NETosis.

Elsherif, who is now a faculty member at University of Tennessee, applied this new technology to sickle cell disease (SCD) because chronic inflammation and hypercoagulability are well known complications in SCD patients, and NETs are thought to be important for both inflammation and blood clotting. Also, previous studies found that plasma from SCD patients caused NET production in neutrophils from healthy individuals, leading to the conclusion that NETosis is associated with SCD pathophysiology.

However, both studies used surrogate indicators for NETosis and did not measure NETosis directly in neutrophils isolated from SCD patients.

“Our technology allows us to quantitatively assess NETosis in neutrophils of patients with SCD where patients are not experiencing pain and other symptoms associated with crisis,” Elsherif said.

The investigators applied their new technology to find that one pathway of NETosis appears to be absent in the patients tested.

“The decreased potential for NETosis in neutrophils from patients with SCD could explain their increased susceptibility to certain invasive bacterial infections, as their neutrophils are unable to NETose and trap and kill bacteria efficiently,” Elsherif said. “Our results could also reflect the response of neutrophils from patients with SCD to hydroxyurea or other pharmacological interventions. Additional studies with a larger patient cohort are certainly warranted and could elucidate important aspects in SCD disease mechanisms.”

This work was supported by grants from the Doris Duke Foundation, a UNC IBM junior faculty development award, and the National Institutes of Health.

Disclaimer: AAAS and EurekAlert! are not responsible for the accuracy of news releases posted to EurekAlert! by contributing institutions or for the use of any information through the EurekAlert system.

Strategies to Successfully Harness AI’s Impact on the Insurance Industry

When promoting for kickstarter, are we preaching in the desert?