One of the barriers to robots taking over in warehouses has been demolished.

The day we were worried about has arrived.

Remember all the pundits telling us that robots were not up to the task of manipulating objects they way that humans can, and as a result automation of much of the manufacturing, logistics, and shelf stocking that humans do will remain at least decades away?

As millions of products move through warehouses run by Amazon, Walmart and other retailers, low-wage workers must comb through bin after bin of random stuff — from clothes and shoes to electronic equipment — so that each item can be packaged and sent on its way. Machines had not really been up to the task, until now.

“I’ve worked in the logistics industry for more than 16 years and I’ve never seen anything like this,” said Peter Puchwein, vice president of Knapp, an Austrian company that provides automation technology for warehouses.

Standing nearby at the Obeta warehouse, the California engineers who made the robot snapped pictures with their smartphones. They spent more than two years designing the system at a start-up called Covariant.AI, building on their research at the University of California, Berkeley.

Their technology is an indication that, in the coming years, few warehouse tasks will be too small or complex for a robot. And as the machines master tasks traditionally handled by humans, their development raises new concerns about warehouse workers losing their jobs to automation.

Because the online retail business is growing so quickly — and most companies will be slow to adopt the latest robotic technologies — economists believe the advances will not cut into the overall number of logistics jobs anytime soon. But the engineers building these technologies admit that at some point most warehouse tasks will be done by machines. Human workers will need to find other things to do.

And it’s not just warehouses that will soon be transformed by Covariant.ai. They’ve cooked up so-called a technique called reinforcement learning, which allows robots to learn through trial and error:

First, the system learned from a digital simulation of the task — a virtual recreation of a bin filled with random items. Then, when Mr. Chen and his colleagues transferred this software to a robot, it could pick up items in the real world.

The robot could continue to learn as it sorted through items it had never seen before. Inside the German warehouse, the robot can pick and sort more than 10,000 different items, and it does this with more than 99 percent accuracy, according to Covariant.

This represents a significant change for the online retail and logistics industries.

Late last year, the international robot maker ABB ran a contest. It invited 20 companies to design software for its robot arms that could sort through bins of random items, from cubes to plastic bags filled with other objects.

Ten of the companies were based in Europe, and the other half were in the United States. Most came nowhere close to passing the test. A few could handle most tasks but failed on the trickier cases. Covariant was the only company that could handle every task as swiftly and efficiently as a human.

And of course, as individual robots get better at their tasks, that ‘knowledge’ can be extracted and fed into other robots. And there is a humanitarian argument:

Like many warehouse operators, Obeta has trouble finding workers willing to do the monotonous work. Each picker handles about 170 orders an hour, or about three per minute, over an eight-hour day. In the summer, temperatures in the warehouse reach more than 100 degrees. It is hard to keep employees for longer than six months.

For Obeta, the new robot is an ideal solution. A job that requires three humans is done by one tireless robot.

I’ve been reading about the coronavirus, and there is a term from epidemiology called R0, or ‘R nought’, which is the measure of how many people are infected by a person carrying a disease. For example, measles has an R0 of 8 to 12: every sick person — undetected — will infect 8 to 12 other people.

We should have an R0 for robots. The Covariant robot has an R0 of 3: each robot deployed will lead to three people no longer working in some warehouse, packing boxes. Good, you might say.

But the robot won’t pay any taxes, buy any sneakers, or hang out at the corner bar after hours. It won’t distributed money like homo economicus.

And all the benefits of its productivity will redound to the owner of the robot, some corporation, one with three fewer employees per robot acquired. And those dollars not spent on salaries, taxes, and benefits will instead be delivered to the executives and shareholders of the corporations. 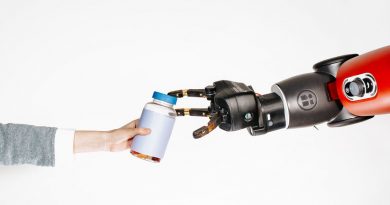 What would make you trust a robot?